In this photograph my grandmother (third from left) poses with a desiccated corpse.  It’s her medical school graduation photo. Eighty years later, I am busy taking glamorous selfies.  That’s really all there is to say about her Estonia and my America.

Except that it’s not.

I’ve been thinking a lot about the immigrant experience recently. I’m writing a YA novel about the daughter of an Estonian immigrant, and I just sent my editor the final revisions. I’ve also been helping a Sudanese refugee recoup the money his government promised him for his education. This isn’t an everyday occurrence for a community college instructor in rural Oregon, but it’s not that weird. Community college is “where they have to take you when you have to go.”

“I’m the daughter of a war refugee,” I told my student the first time we met, trying to make a personal connection.

It felt cheap. I drive a Mustang. My parents went to UC Berkeley. I can say exactly three things in Estonian.

Shit quickly, the bear is coming.

My student is seven feet tall, lean as bone, and darker than anyone I’ve ever met. He was a child soldier. He told me how the soldiers longed for the rains to come and wash away the roads and stall the fighting. He said he still believes in the cause.

“My mother is from Estonia,” I said.

“Ah, yes, she must have fled the soviets,” my student said in heavily accented English he learned with a hand-held radio and a dictionary.

They fled the Soviets.

When the Soviets invaded my family fled. Theirs was the last ship to escape. The boats behind them were all bombed.

There is an Estonian saying: Paljugi mis me tahaksime. There are many things one might want. The implication is that you’re not going to get them.

They’re not woe-is-me people, the Estonians. They don’t go around rending their clothes and smearing ashes on their faces.

When I was growing up, I asked about the family’s flight.

“I don’t remember much,” my mother always said. “Just that I threw up on a green and brown blanket.”

Vomit is important to children, so for many years that was enough to make it a story. When I  stopped to imagine the details, I imagined my mother leaving on a giant freight liner while men on the shore shot at the ship with rifles. The sinking ships, the ones that did not make it, were just fireworks in the dark water. And my mother threw up on a blanket.

It wasn’t until years later that I watched the Singing Revolution, that wonderful documentary about Estonia’s fight for independence. They showed footage. It wasn’t a freight liner. The Estonians fled on fishing boats. The men with rifles were an airstrike.

A quarter of the population was killed. It was a genocide.

When I asked my mother about it, she responded thoughtfully, but without drama.

“I had a friend in the refugee camps,” she said. “We were afraid to look at pictures of the ocean. I guess that was because we had seen people drowning.”

Even as a little girl, I must have felt the deep undercurrents beneath those mild-faced versions of the story. I worried about bombs. I was haunted by a recurring fear that men with rifles would make me pick which of my parents they were going to kill.

“What happens if someone invades America?” I asked my mother when I was little.

She knew what I was asking.

“Estonia is a very small country,” she said. “They don’t do that to big countries.”

“Some of the Estonians hid in the woods waiting for the Americans to rescue them, but the Americans never came,” my mother said sadly. “It was a very small country.”

I have made too many jokes about people who are 1/18th Cherokee to now say that I feel Estonia’s blood in my veins.

But I feel Estonia’s blood in my veins.

We received a visit from an Estonian cousin. He reminded me of myself: cheerful and energetic. But when he left my mother said, “he’s got that Estonian sadness,” and no one needed her to explain. 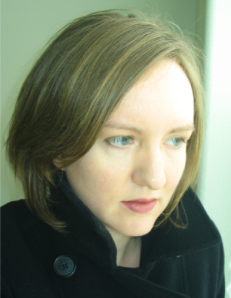 Perhaps with a touch of that Estonian sadness

When I was a little girl, I spent a great deal of time thinking about how I would survive in the woods. I worried that something would happen, and I would have to flee to the woods in the dark. Although I had a happy childhood, I knew that fear without ever having lived it, a fear so deep it shatters what is human, a terror the color of bile. The taste of rifles. The sound of men drowning. They’re coming!

I have always assumed that all children know this fear, a remnant of our animal selves.  I assumed it was a developmental stage, like language acquisition and puberty.

But recently I was sitting with my friends at the lunch table. They were still teasing me about the thriller I had just published.

“We always thought you were such a nice girl!”

We got off topic. Someone started talking about National Geographic.

“Remember,” I said, “how you’d go visit your grandma and you’d get a big stack of National Geographics and go through each one looking for photographs of dead bodies?”

“Only you went through them looking for dead bodies,” my friend said.

I didn’t mind. I’d been a good Lutheran girl for too long. I liked my new image as edgy thriller writer.

But I knew they were wrong. If I had asked my grandmother, Minna Kannelaud, she would have sat down with me and looked for the bodies.

There is very little to connect her Estonia to my America, and I cannot begin to imagine the life of my Sudanese refugee. If I were to say that I feel Estonia coursing through my veins there would be real Estonians, who live in Estonia and drive delivery trucks and sell insurance, who would have every right to laugh at me.

Shit quickly the bear is coming!

Maybe all I can say about the second generation experience is this: I tried to look over the railing of my mother’s stories and into the ocean.  I tried to imagine. 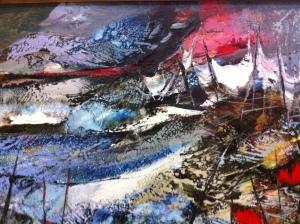 And I know that one day my Sudanese student will have a teenage son who eats Lucky Charms cereal in front of the TV and likes football and plays video games.  And, on some late nights, deep in his bones, that boy will feel the winds shifting and the drenching rains moving across Sudan.

Karelia Stetz-Waters is the author of The Admirer and As Though Our Beauty Were a War. You can find her on the Web HERE.