On November 15, 1917, a group of women picketing the White House for the right to vote were jailed for blocking sidewalk traffic. In prison, they were punched, kicked, and beaten unconscious. One of the women, Alice Paul, went on a hunger strike but authorities tied her to a chair and forced a tube down her throat, pouring in liquid until she vomited. This continued for weeks.

On July 16, 1946, Maceo Snipes became the first black person to vote in Taylor County, Georgia, since Reconstruction. He’d just returned to his family’s farm after serving the U.S. for several years in WWII. The day after he voted, a group of white men in a truck pulled up to his home and shot him in the back, killing him. No one was convicted of the murder.

A dummy hangs from a lamp post in an attempt to intimidate African-Americans and keep them away from the voting polls in in Miami, Fla., May 1, 1939. (AP Photo)

In August 2012, 96-year-old Dorothy Cooper applied for the new mandatory voter ID card in her home state of Tennessee. She supplied her birth certificate, a copy of her lease, and her voter registration card. But she left her marriage certificate behind. So Cooper, who was on the voting roll, was denied the ID. 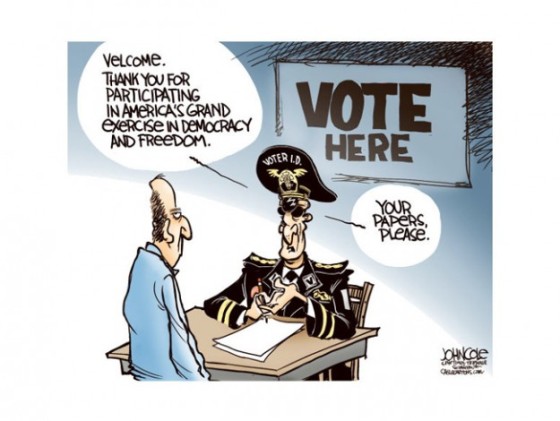 So my questions are: Do you think Dorothy Cooper shrugged and said, “Oh well. It’s just my vote. They’re all a bunch of sneaky politicians anyway”? Do you think Alice Paul would care whether we’re sick of politics? Would Maceo Snipes understand that we don’t want to see one more commercial so we don’t listen at all?

I don’t. I think they’d say, “You just don’t want to get your hands dirty. Easier to wipe them clean of it all and stand on a false platform of moral indignation.”

We’ve got five weeks, people. Five weeks to sift through the dirt and find the gold. It can be backbreaking work. That’s why Ben Franklin, when asked by a woman as he left the Constitutional Convention whether we had a republic or a monarchy, replied, “A republic, if you can keep it.”

Yes, there’s too much noise and too much bickering. Sort out the crap and take what’s left. For each of us, what’s left is different. Figure out what’s left for you, and use it.

The April 1994 election in South Africa marked the end of apartheid and was the first election in which all adults, regardless of race or gender, could vote.