Maria* came to the United States from Mexico when she was seventeen. This is her story:

I did most of my growing in a village called Cocoyoc, three and a half hours south of Mexico City by bus, two if you took a car.

In that town they used to grow sugar cane in their gardens. When it was time to harvest, they burned it. We kept our laundry out in the sun to dry; all of a sudden you’d see a sort of snow coming down but it was black and we’d have to run to bring in the clothes.

There was corn all around also, and mango and avocado trees. We had a lot of water in state that we lived, Morelos. The streets were dirt with rocks and gravel. When it rained it was very muddy.

My grandfather lost his wife when my dad was six years old. They lived in the mountains on a farm, so they didn’t have access to doctors.  My grandma had complications and she passed away with the baby. My grandfather never got remarried, so he took care of his kids—seven kids he had. My father was the littlest. He was the last one to get married, so I think that’s why Grandpa moved in with with us.

On Sundays Grandpa would go get us breakfast, fresh milk and bread, and wake us up, “Come on, get up! I have breakfast!” He was very religious. He’d tell us to wear veils at church and not to wear shorts. “Cover your legs.” He loved to sing while I played guitar. He would always pick me to go to the nearest town to get tools. I was his favorite.

I was happy in my childhood. I loved school. My mother was very hardworking and very good to us. She took us swimming. I remember she had a lot of headaches. My grandpa would rub her head with homemade remedies he knew.

My father built houses. He didn’t make that much money and we could only rent a house. I think my father wanted to own a house, and the only way to buy land and build a house in Mexico was to work in America. When I was seven, he left my sisters and I with my mom and grandfather and went to the U.S.

He came to Barrington, Illinois, where someone he knew worked in a restaurant. He worked as a dishwasher and then maintenance at a golf course. He sent money back. Mom saved the money in a separate bank account.

He visited us every two years and stayed for the wintertime. At one point, he stayed for a year and a half, then went back to the U.S.  We did miss him while he was gone. But it was the leaving that was hard.

Every time he came back, he would surprise us. I would come home from school and he was there—after two years! One time, he was in a taxi and I was walking. He made the taxi stop and said, “I think that’s my daughter.” I said, “I think that’s my dad.” And we started crying. I’m always the one to cry. My other sisters never cried. I was the only one.

In 1986, my dad was given amnesty through a Reagan program and he became legal.

He started building his house in Cocoyoc when I was nine. We lived in it and he would continue to go back to the U.S. to make money to keep building the house—enough for

painting, appliances, etc.  It was a one-story house. We had three bedrooms, a bath, kitchen, dining and living room. I think it was pretty much like the houses here. In our village, homes were one big room and you didn’t use to have the bathroom in the house. The bathrooms were outside. It was one of the things we were excited to have, that I remember most. I think the house was similar to the kind here because he worked in the U.S., saw it, and came back and built it.

My dad would always say to my mom, “We will get you a washing machine.” Here in the U.S. you have a nice washer and dryer. Not in Mexico—you do laundry by hand.

On top of the roof, we had strings to hang clothes to dry. My grandpa was always helping with the laundry. He was up on the roof and he was coming down with a bundle of sheets and he fell onto our cement driveway. That’s how he died. I was sixteen.

My dad was home at the time. I was walking  from school and I saw my dad’s truck; he was speeding and he didn’t even see me so I moved to the side of the road. He stopped then and said, “Jump in the back. Your grandfather is dying.” My mom was holding his head. He was praying.

We had no 911 or ambulance service. We drove fifteen minutes to the doctor and she couldn’t do anything. So she sent us to the nearest hospital, three hours driving. They also could do nothing. He had passed away on the way.

After that, my dad decided he didn’t want to stay there and it’s better that we move. He said, “Let’s go, I want to sell everything and take you to the U.S. to see a different life.”

It was 1990. It was exciting for me to think I’ll be in the United States. My dad was a resident. We were not. My dad knew someone to help us. The man told us we had to dress nice. “You need to look like you’re from the U.S.,” he said.

We sold the house, the car, the furniture, our clothes, everything. Part of the money from selling everything my dad saved for our trip, some he saved for a small piece of land he had purchased in Mexico in case we ever needed to come back.

We took a bus thirteen hours to the border. We got to a hotel on the Mexico side. My mother and sisters and I went to buy food and my father met with a man who told him to cross with our things through the gate and then he and another man would cross us at the river. There was more water than they thought, so they carried us on their shoulders, five of us. And then we crossed three tollways on foot, running. That was the scariest part. 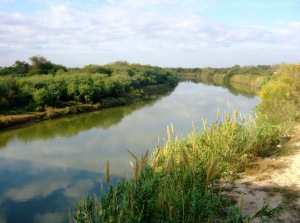 They took us to an apartment building. They gave us papers so we could fly. We didn’t know what an airport looked like because we never flew, so they drew us a map and picture and explained to us exactly what to do. They told us how to answer questions, that we could not tell anyone our dad was our dad. “Pretend you don’t know him or he will be deported,” they said.

We flew into Chicago. We got here in December and I’d never seen snow. We were excited. We got a one-bedroom apartment for three months while my father searched for a house. I slept on the sofa but I didn’t care. Everything was new. My two younger siblings went to school. I went to work in a picture frame factory. I just liked it right away. I was glad we were all together, my family. That’s what I liked. That’s what mattered to me. When we moved here, my dad’s priority was to be together as a family.

Whenever we saw a cop we were very worried. I was driving with no driver’s license. When I applied to work, I had to get a fake SS card and fake ID. You go to Chicago and there’s places you can get it. They always come to you, “Oh, do you need…” I didn’t like to go to those places.

There’s no specific moment I’ve experienced discrimination. I can sense something, like if you enter a place where everyone is white and American, in my mind they are thinking, “Oh, Mexican. Oh, Hispanic.” And so they’re wondering, “Are they illegal?”

We were illegal for two years. After we got a house, and my dad became a permanent resident, he went to a lawyer and asked how we could legalize ourselves. It took six months to get our green cards–though they were pink–and we went out of the country. Then we came back into the country legally. After that we had to wait five years to become citizens.

I do care about the issue of illegal immigration. When we came, I was a child. They never asked me. As long as I was with my family, I was ok. I never thought about it. When my father came, he worked, he paid taxes. So I think he did deserve to get his papers. I do think a lot of people, they need opportunities to work, to make money and be able to go back to Mexico.

Current illegal immigrants are driving with no license, no insurance.  They should be legalized in some way. Especially the people who have been here fifteen, twenty years. But I do believe if you are on a waiting list, the U.S. should make them a priority.

The waiting time for Mexico is longer than any other country. My older sister was married so she did not come with us. A couple years later, my father helped her cross, illegally. But she didn’t qualify for citizenship; she needed to be under 18 for my father to apply for her. So she’s been here for more than twenty years and she still has no papers. She had kids here, she works, most of her life is here.

My aunt is a citizen. She applied for her daughter, who is in Mexico. Twenty years later, she’s still in Mexico waiting.

My sister-in-law applied over ten years ago. She’s still waiting. Nothing.

Mexico is a great place. People work hard but there are no jobs, or they pay very minimal. They need to create more jobs so people can find work.

After over twenty years in the U.S., I feel like I don’t belong here and I don’t belong there. Here I don’t have friends like I used to. It’s not the same because they’re not the ones who knew me when I was a child. I go back and nobody knows me–the neighbors or old school friends. We didn’t keep in touch. I have to ask who is who because I don’t remember, either. It changed a lot. You don’t know how to go around the place anymore. I’m not sure where I belong.

Maria was kind enough to share her true story with us. All respectful comments are welcome.