At the age of 39, my great-grandfather, Arthur, went to the hospital to have his tonsils taken out. I imagine they’d been troubling him often and he just couldn’t stand it anymore. He was a coal freight agent for the Chicago Eastern Illinois Railroad.

His wife, Alice, 37, and their two children, ten-year-old June and fourteen-year-old Arthur, Jr., dropped him off the night before the surgery, which was to be performed the next morning. Even back then, it was not considered too significant a surgery and so they dropped off their husband and father, said goodbye and see you tomorrow. 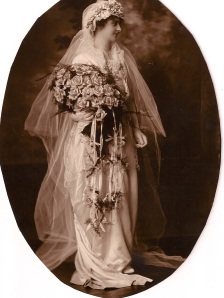 The following morning, Arthur died on the operating table, his heart too large, literally, to endure surgery. It was 1930, and Alice was left alone with two children at the start of the Great Depression.

The bank took the house in Chicago, forcing Alice and the children to move to an apartment in Rogers Park, the first of several apartments. It’s left to me to imagine what it was like to lose a husband and then give up her home and the belongings that wouldn’t fit in the new apartment; to leave her friends and neighbors, maybe a tree she used to like to sit under, or the way the front door creaked a welcome home. To imagine how she told the kids that now that their father was dead, they had to go to a new school with new people. She would never own a home again.

Then Alice took the only job she could find: curling dead people’s hair in a funeral parlor. Every day she got up and went to the funeral parlor to sit in silence and curl hair so her children would have a place to live and food to eat. After a few years, she found another job in the ticket office at Riverview amusement park on the city’s Northwest Side. She got her children through the Depression, and during the war she worked for the government.

She didn’t remarry until the 1950s, until her children were raised and raising their own, until June toddled my own mother on her lap.

This is one of my family’s stories.