In Bend, Oregon, we stayed with my uncle–the same uncle who has appeared in several of my posts. (Click HERE for one, or the previous sentence for another.)

My husband on my uncle’s deck in Bend. He gets to see this view every day. I was jealous, too.

Took a hike along the Deschutes River

We drove north from Bend along Rte. 26.

The pine forests were so magnificent, we pulled off to the side of the road to stare at the trees. 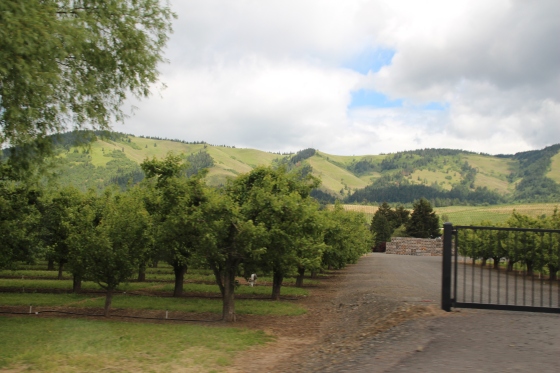 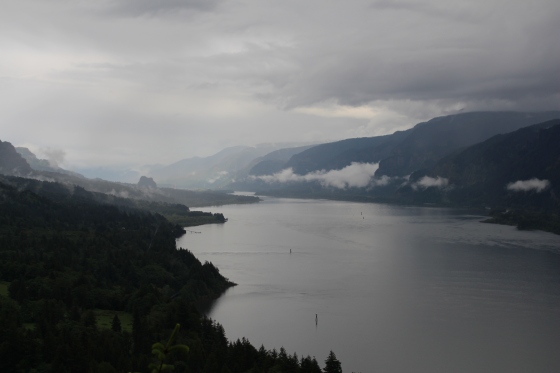 We crossed the Columbia River and drove in Washington for awhile. Despite the rain, the views were spectacular. 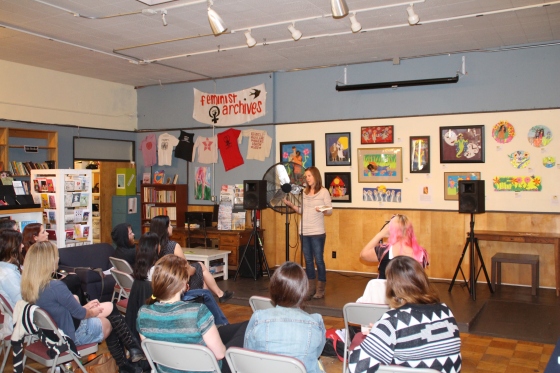 Reading at In Other Words. I got to meet some of the other women in The PDXX Collective, a group of feminist writers based in Portland. 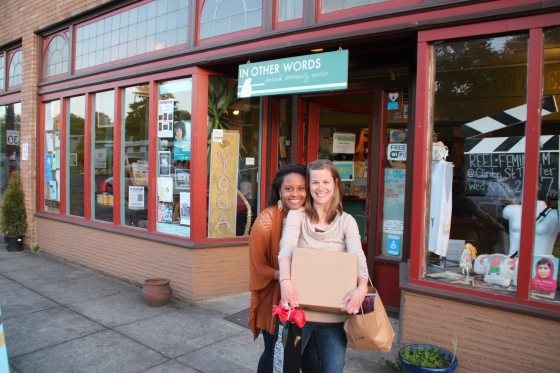 Me and my good friend and writer, Melanie Coffee, outside the bookstore

We made it home Tuesday afternoon, and on Wednesday I traveled two hours away to the lovely town of St. Joseph, Michigan for a reading at Forever Books. It’s a wonderful store; stop in if you ever find yourself in the area.

Me with store owner Robin Allen

St. Joseph is right on Lake Michigan. Sorry for the dirty car window.

Next Wednesday evening, I’ll be in Milwaukee. If you’re in the area, I’d love to see you! Click HERE for info.

Have a wonderful Memorial Day weekend!

As you know if you’ve been following, I’ve become lax about posting pictures during the road trip, partly because Internet connection was spotty, and partly because I was having too damn much fun.

Here are photos of Day 4, the drive from Boise, Idaho to Bend, Oregon.

I learned several things about Oregon on this trip: eastern Oregon is surprisingly the most unpopulated place we traveled; Oregon has enormous crows (can’t tell you how many times I pointed out the car window and said, “A hawk!” only to discover it was another crow); you have to pump your own gas; and the drivers are extremely friendly to pedestrians.

There was so little to look at, I started taking pictures of my feet: 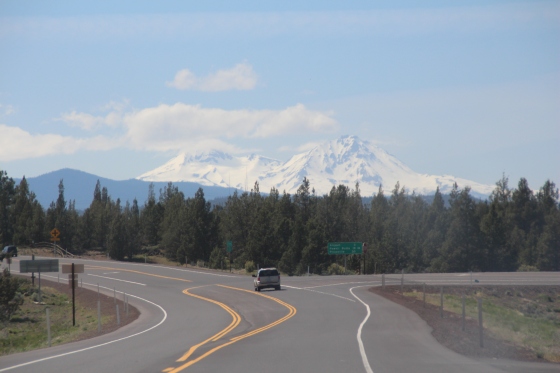 I put my husband in charge of taking pictures during the book party at my in-laws, and therefore I have no pictures of the event to share. However, I do have these, of our day in Boise – enjoy!

Top of the hill

Popped into this bookstore in downtown Boise and they had my book — a fun surprise.

My niece, a pretty spectacular reason to visit Boise

Day 2 of our road trip: Teton Pass through western Wyoming, Hwy 20 across Idaho, to Boise (For Day 1, click HERE): 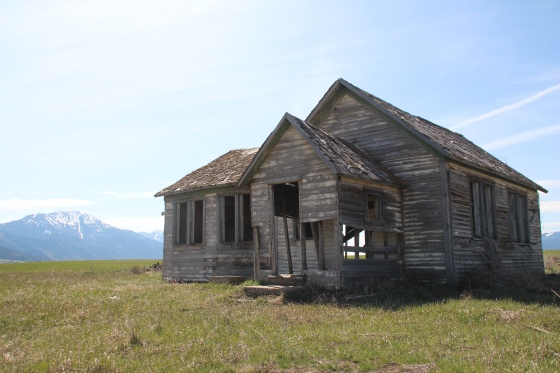 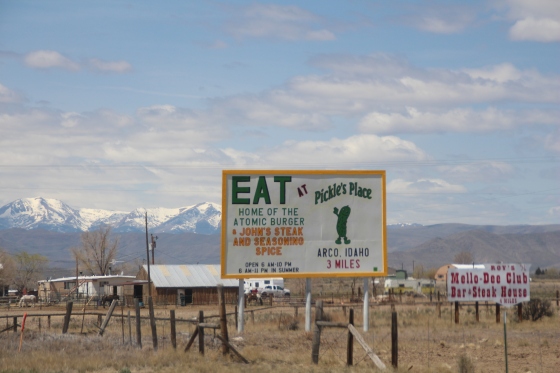 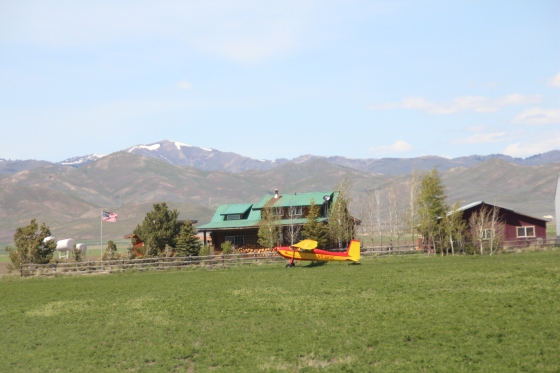 Just gonna park my plane in my front yard.

We’ll be in Boise for the next day and a half before we leave for Bend, OR. More to come….

So, my sister might be blushing right now because she didn’t know I was going to write this post. Or maybe she’s not blushing–she’s the youngest in the family so attention is an old friend. This is how she used to smile for the camera:

I’m five years older than she is. When we were kids, she followed me everywhere. She followed our brother, too, but he was even older and usually wanted nothing to do with us. Some of my friends got annoyed but I never minded. She was entertaining and I was quiet. I liked to observe and she liked to ham it up. Still does. It’s not a surprise that I’m a writer and she’s a therapist for children with disabilities who sometimes slap, kick, and bite her.

We called her Katiebug. Our favorite game was chasing each other around my bed. We called it, appropriately, “Chase Around the Bed.”

She often sat in her little chair and let me teach her everything I knew on the chalkboard in the basement. 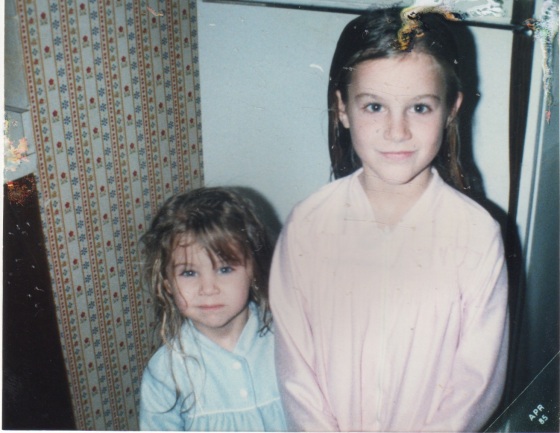 Can you not tell our personalities from this picture?

She snuck in and slept with me many nights. Other times, she knocked once on the wall adjoining our rooms. I knocked in response to say goodnight.

That was a long time ago. She’s moving to Ireland for a year on Wednesday and I’ll miss her.

When she started high school, I was off at college. We grew apart and I lost track of the details of her life. She got tripped up for awhile. We almost lost her to a lousy boyfriend and too many drugs. What’s important is she got back up. No one forced her. We just surrounded her with worry and love and she stood up all on her own.

I didn’t figure out how much I would have missed her until she came back to us. That’s when I realized I almost had a life without her friendship. 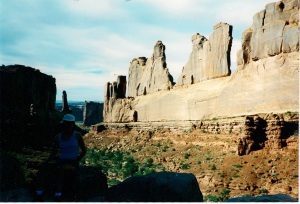 We’ve stacked a lot of memories in the last eleven years since our first road trip, memories that fill our cups and flow around us. They scatter–were those biker maids from Utah or Colorado? Did we see wild mustangs in Wyoming or South Dakota? Did we climb that promontory in Ireland at Dunmore Head or Garraun Point? And which road trip did we experience what “soft shoulder” meant?

Late night chats in the dark of unfamiliar hotel rooms. Songs and conversations to fill the hours and the roads, past sagebrush and rocky mountains, truckers and giant windmills. Pine Ridge. Starved Rock. Dixon. We share a desire to make memories. It is purposeful, diligent, and carefree.

Don’t get me wrong–we’re sisters. We used to fight to wake the dead. She can still throw me a look that makes me want to wipe it off her face with my foot. But they’re fewer and farther between as we get older. And luckily, she still thinks I’m perfect.

She says she’s a bit terrified to move to Dublin. Of course. Everyone would be. But here’s the thing–not everyone would still go.

Slainte to you, Katiebug. I love you more than my luggage. 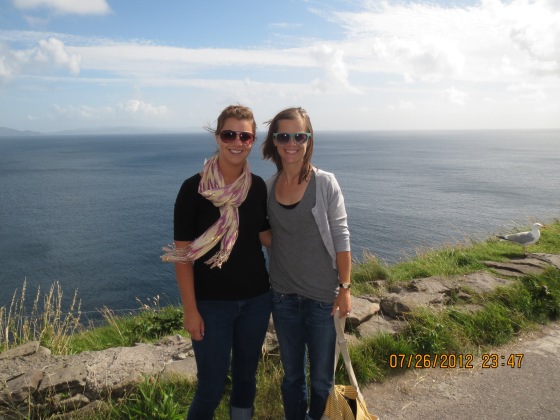